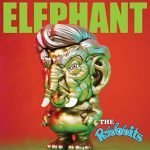 The Rabbbits is the brainchild of internationally acclaimed artist Ron English. The songs are written by Ron English and Joe Johnson, and they tell stories from the fictional underworld Delusionville, an Aesop’s Fables on acid utopia populated by Ron English’s anthropomorphized animals. Each character is played by a different renowned singer from the rock, opera and blues worlds. “Elephant” is the third release in the Rabbbits series and tells the story of a disruptive orange elephant named Trunk who forever changes Delusionville.