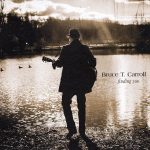 After years spent “lost in the wilderness” of music and commerce (i.e. building and running a music venue in Larchmont, NY called the Watercolor Cafe), Bruce T. Carroll returned to his roots and his first and abiding love: lyric songwriting. With the release last year of his first official album, “Ruckus and Romance” (called by No Depression magazine “devilishly brilliant” and “intensely beautiful”), Bruce has forged a new career as a singer-songwriter using irony and imagery as his tools in trade.
“Finding You” is a six-song EP that is a sort of lyrical tone poem with the theme of finding, or regaining, something that is missing, or lost.
The first song on the record, “Fox In The Henhouse”, is a sort of paean to what once was and a dire analysis of how things are now in this country. The song “I Will Never Leave” was written on November 9th, 2016, a day after the fateful election that brought us to this day.
The players on the album are: Bruce T Carroll, Andy Stack, Sara Milonovich, Lee Falco, Brandon Morrison, Jeremy Baum, Adrien Reju, David Bernz, and Melissa Ahern.
The album was produced by Andy Stack and recorded at Buffal Stack Studio in Beacon, NY.